Samurai are the name of warriors in the feudal era in Japan. They wore Yoroi (armor) and Kabuto (helmet) on wars to protect from getting injured. On top of the practical purpose of protection, Samurai also pursued beauty in Yoroi and Kabuto. The helmet (photo above) appears to be a good example showing the two aspects of Kabuto. This is a Kabuto made in the 18th century (the later part of the Edo Era) based on an older one, reflecting a very high quality of craftsmanship. It was actually a family treasure of the Matsudaira Clan who governed Izumo (present Shimane Prefecture).

The dragon-crest Kabuto was exhibited at Tokyo National Museum in fall, 2022. The museum must be one of the best places to learn the Japanese history and craftsmanship.

The black shining mask of Darth Vader in the movie “Star Wars” is said to be modeled after a black lacquered Kabuto of the Date Clan. I should plan to visit the Sendai City Museum, Miyagai, where the black Kabuto and Yoroi of the Date Clan are exhibited. 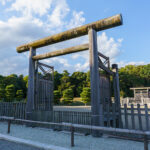 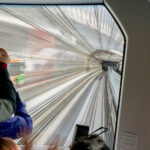