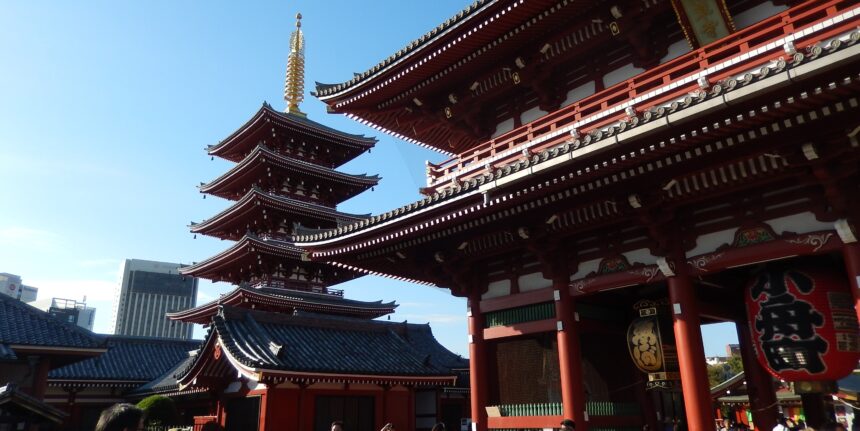 Asakusa is one of the most popular sightseeing spots in Tokyo. A symbol of Asakusa is the Sensoji temple having history of over 13 centuries. Asakusa has the atmosphere of “old Japan” . The followings are main features of Asakusa.

When you go to Asakusa, I would like to recommend you visit the Asakusa Tourist Information Center which stands near Asakusa metro station. This building will catch your eyes with its unique exterior design. It was designed by a famous architect Kengo Kuma who also designed the new Tokyo Olympics Stadium. Panoramic views from the observatory deck on the 8th floor are fantastic. You can see not only Asakusa but also the Sumida river and the Tokyo Skytree tower.

Infront of the center, there is “Kaminarimon” gate of the Sensoji temple. Two fearsome guardian gods are installed at the gate to ward off evil spirits. They are the God of Thunder and the God of Wind. The gate was rebuilt after World War II. A huge red-paper lantern is hung in the center of the gate. It was donated by Matsushita Kounosuke, the founder of Panasonic.

The street between the gate and the main hall of the Sensoji temple is called Nakamise shopping arcade. It is the ideal place to buy traditional Japanese souvenirs, such as folding fans, inexpensive kimonos, traditional toys, Japanese paper umbrellas, figures of beckoning cats, etc.

In the precinct of the temple, there are some huge buildings such as the Hozomon gate, the five-storied pagoda and the Kannondo main hall.
The five-stories of the pagoda represents five elements of the universe in Buddhism. They are earth, water, fire, wind and space. It contains the ashes of the Buddha. In India, the birthplace of Buddhism, the stupa was originally dome-shaped. It changed into the current tower-shape pagoda during the times when Buddhism was introduced to China.
The Kannondo Hall is Sensoji Temple’s main building, just past Hozonmon Gate. It was first built in 1651, destroyed in World War II and rebuilt in 1958. The hall is said to hold a golden image of the Goddess of Mercy (Kannon) .

There are some ways of prayer. At temizuya (Purification fountain), visitors should wash their hands and mouths before entering the sacred area such as a main hall.

At kouro (incense burner), visitors usually beckon smoke to their heads and bodies because the smoke is believed to have the power to cure diseases and to improve health. It is the purpose of worshipers to stand in front of the place where the Kannon is stored, to throw a coin into an offertory box and to pray something.

In the temple complex, there are o-mikuji stalls. For a suggested donation of 100 yen, visitors may consult the oracle and divine answers to their questions. Visitors shake a metal container to get a labelled stick and read the corresponding answers they retrieve from one of 100 possible drawers.

6. History of Asakusa
Originally Asakusa was a small village by the Sumida river. In the early 7th century, fishermen found a small statue of kannon, the goddess of mercy in the river. The Sensoji temple was built to enshrine the kannon. At the time, the temple was not big.

Asakusa started blossoming in the early 17th century when Tokugawa Ieyasu established the Shogunate in Edo, now Tokyo. He designated Sensō-ji as tutelary temple of the Tokugawa clan and his successors developed Asakusa to be a center of entertainment and pleasure. Many people flocked to attractive places including Kabuki theaters and story-tellers theaters called Yose.

During the World War II, the temple was bombed and destroyed. It was rebuilt later and is a symbol of rebirth and peace to the Japanese people.

8. Reference
(1) A complete guide to Japanese culture and scenic spots in English by Ueda (Goken)
(2) An article about Sensoji temple by Japan-guide.com as of July 2020 (https://www.japan-guide.com/e/e3001.html)

■ Contact
Please fill in the form below, if you want to feed back to the author “Eddy Murayama”. 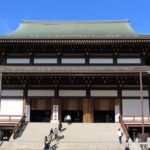